Ame-no-Mitori is one of the three starter Guardian Spirits
, along with Makami and Kagewani.
Guardian Spirits can be selected on the Shrine menu and each provides a different boost to the player.
Activate Yokai Shift by pressing △ + O (B + Y on Xbox/Steam controller)when the Amrita Gauge is full.

"An eagle-like guardian spirit enveloped by lightning. They are also known as Ame-no-Hinatori or Takehinatori, and are seen as either a servant of the lightning gods or as a lightning god itself."

"An old legend states that it was these spirits that brought the first rice plants to Japan and protected the crops. It was also believed that thunderstorms helped rice crops flourish, further cementing the myth."

"Ame-no-Mitori has been depicted as eagles, swans, cranes and all manner of birds. The blinding lightning surrounding them makes it difficult to make out their true shape." 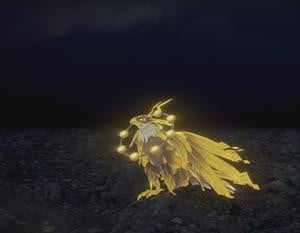