Hyobishin is one of the Guardian Spirits in Nioh 2
. Guardian Spirits can be selected on the Shrine menu and each provides a different boost to the player.
Activate Yokai Shift by pressing △ + O (B + Y on Xbox/Steam controller)when the Amrita Gauge is full.

Hyobishin, the black panther, is one of the eight directional deities in Onmyodo practice. It is known for its violent temper and unforgiving nature toward the impure. Some believe it to be the avatar of Santo -Kojin, god of fire and the hearth and protector against calamities and the impure. Others believe it to be Keitosei, the star responsible for solar and lunar eclipses, that is present in the India-derived Sukuyodo school of astrology. While there were many who feared solar eclipses, believing them to be inauspicious omens, those who were more educated knew they had nothing to fear. Onmyodo practitioners kept records that allowed them to grasp the cyclic nature of eclipses, and some were officialy tasked with predicting their arrival in as early as the Nara period. It is this said that Hyobishin and Keitosei both test humanity on its ability to discern the truth when faced with bewildering circumstances. 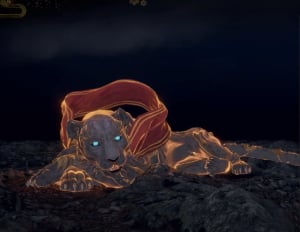