Inosasao is a Guardian Spirit in Nioh 2. Guardian Spirits can be selected on the Shrine menu and each provides a different boost to the player. Activate Yokai Shift by pressing △ + O (B + Y on Xbox/Steam controller) when the Amrita Gauge is full.

Inosasao is an ancient boar that is said to have gained supernatural powers over its many years of living, its immense age apparent by counting the dwarf bamboo stalks that grow on its back.
Since the Jomon period, the wild boar has been worshipped as a symbol of childbirth and bountiful harvests due to its ability to produce many offspring. Others worship it as a symbol of the power of nature, its ferocious strength and sharp tusks reminding them how savage nature can be. While the worship of boars has become less common over time, several legends of boars who have come to the aid of humans remain.
One example is the tale of Wake-no-Kiyomaro, a nobleman of the late Nara period, who is famous for foiling the plans of the monk Dokyo, who tried tricking his way into the position of emperor. It is said that a boar saved Wake-no-Kiyomaro when 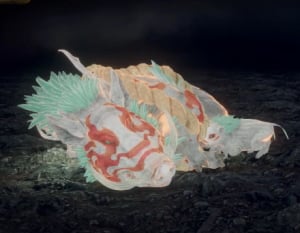