"What's the matter? At a loose end? If only my companions could be so relaxed. They have all their hands full, what with the yokai popping up all over the place. They're all out demon hunting and I have no idea when they'll be back. So it's just you and me... Hmm... Actually, this might work out perfectly. Ahem! How would you like the honor of accompanying me, the mighty Raiko?"

"So, the demon was seeking revenge on Tsuna. It would appear he is as hated by their kind as me. Well, we can take solace in the fact their dastardly plot was defeated, though I fear the demons will develop a taste for using such tricks after this initial success. I wonder if there is some way to discourage them from trying again." 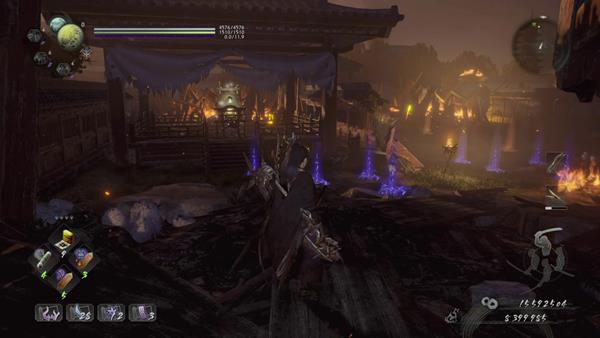 Upon arriving at the starting point, you'll see the first Kodama Shrine ahead and Minamoto no Yorimitsu. Speak to her and she'll join your party as a companion. When you're ready, proceed forward and you'll first encounter a Tesso, kill it, and then loot the corpse to find x1 Sacred Water. Next, head down the ladder and make your way underground. Head right and you'll see a Nuppeppo yokai along with a Gaki, kill both yokai and loot the corpse to find x1 Medicine Case. In the same area, you'll also encounter a Dweller, kill it and then go right, there's a path that just circulates back to the ladder. You'll encounter another Dweller and at the end is a corpse that you can loot to find x1 Highest Quality Iron Platelet and x1 Large Spirit Stone - jump back down, go back to the section where the Nuppeppo was, and head left where you'll see a ladder that you can climb. 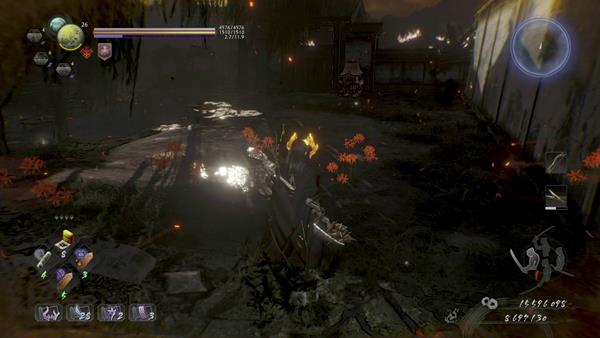 At the top, you'll immediately enter a dark realm. Turn left and check the corner at the end to find a corpse that you can loot to find x1 Large Spirit Stone and x1 Gunpowder Bomb. Next, head down to the bottom section of the open area, and you'll be ambushed by a group of Yokai. 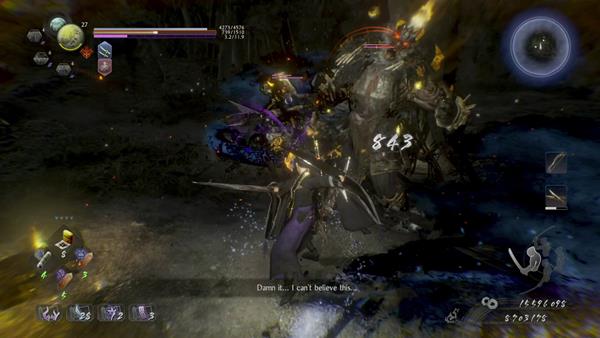 A Kiryoki and Yamanba will first appear, followed by a Nuppeppo and x2 Gaki. Make sure you kill the Gaki first before you shift your attention towards the Nuppeppo. Killing the Nuppeppo will destroy the dark realm. Once the dark realm has disappeared, make sure to loot the corpses around the area to find x2 Large Spirit Stone, Zenki and Goki, and 1x Antidote - before you continue forward, go back up the slope and use the second Kodama Shrine. 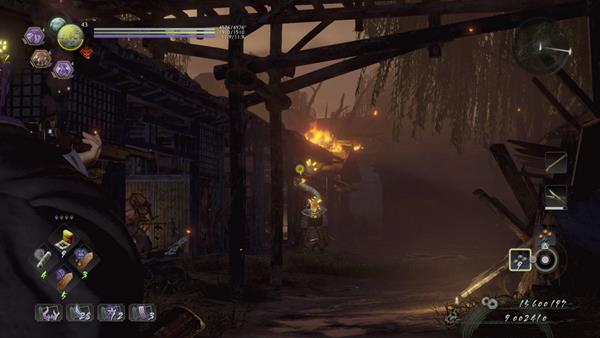 After clearing the area, continue your exploration and you'll first encounter a Rokurokubi patrolling the path ahead. Shoot it first from afar with your ranged weapons because if you charge in, you'll aggro the rest of the yokai that's inside a hut on the left which is x2 Dweller carrying explosive barrels on their back and small Spiders. After killing the Rokurokubi, clear out the ones in the hut. You can shoot the barrels on the back of the Dweller to destroy it so that they can't use it - check inside the hut to find  x1 Sacred Water and a Large Spirit Stone from the corpse. 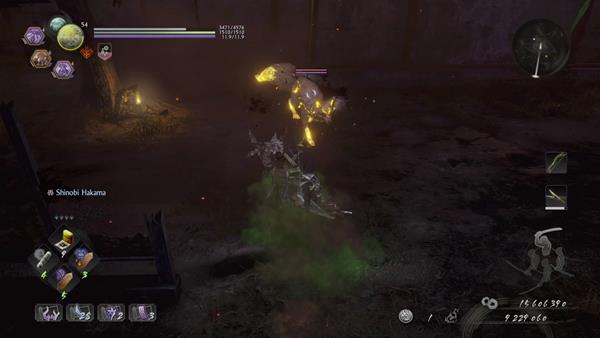 Next, check the house beside it where you'll encounter another Rokurokubi, kill it, and loot another corpse that's inside to find x1 Shinobi Box and x1 Gunpowder Bomb. Go outside the house and check behind it where you'll encounter a Fox Spirit yokai that's guarding a tree. Kill it and loot the corpse that's by the tree to find x1 Salt and a Summoner's Candle. After killing it, there's a makeshift path nearby that goes up to the rooftops of the houses. Ready your ranged weapon and shoot the Shinobi men that are around the section - work your way straight on the rooftops until you reach the other end where you'll see a ladder that you can climb down. 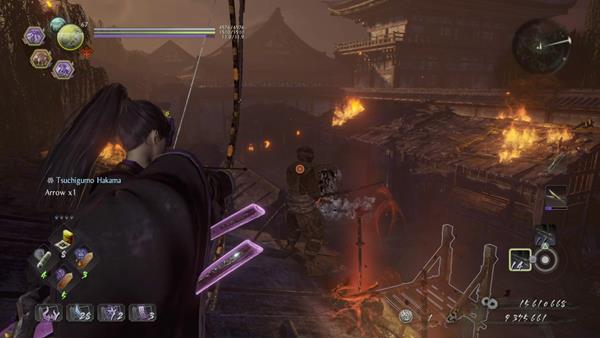 At the bottom, you'll see a Wheelmonk and Oboroguruma yokai. You can ambush the Wheelmonk yokai that's by the corner on the left side of the ladder and then kill the Oboroguruma next. Once you've killed both yokai, open the gate on the east side to unlock a shortcut that leads back to the second Kodama Shrine - before you continue progressing, make sure to check every house around the section to find chests and loot from corpses. 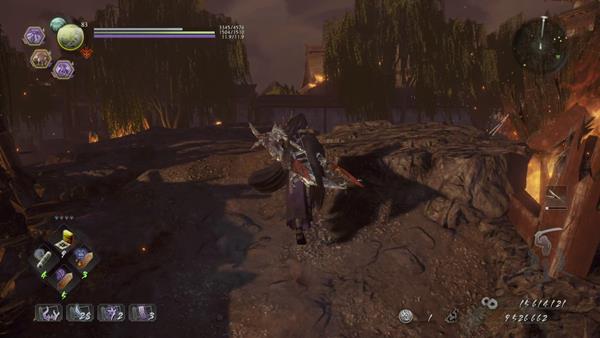 After you've cleared the section of destroyed houses, head west and you'll see a slope next to the west gate. Head towards the slope and jump to the bottom where a Flying Bolt will spawn. Kill it for a chance to obtain its soul core, Flying Bolt Soul Core. The path is pretty much blocked and you'll need to clear out the yokai that will spawn. Apart from the Flying Bolt, a Rokurokubi will appear, followed by x2 Wheelmonk, x6 Spider, killing the last batch of Spider will dispel the dark mist that's blocking the path ahead - after clearing the area, make sure to check behind to find a corpse that can be looted to obtain x1 Lacquered Spear and a Lumicite Shard. 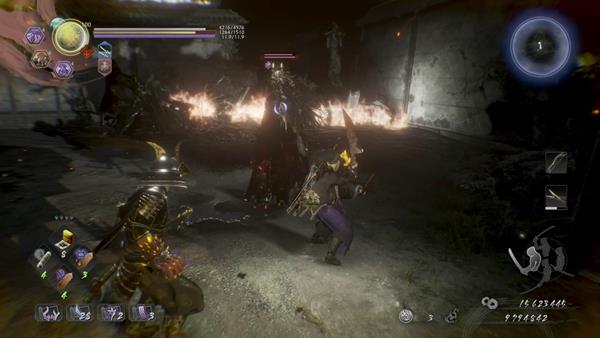 Next, head towards the marked objective where you'll find a man standing under a tree. Approach him and he'll tell you that the person you're with is not the real Raiko. The woman then will reveal her true form which is a shapeshifting Yokai named Yasha and the man named Watanabe no Tsuna will join your party to defeat the yokai - you'll complete this mission once you've slain the yokai, speak to Watanabe to exit the area.