Kagewani is one of the three starter Guardian Spirits
, along with Ame-no-Mitori and Makami.
Guardian Spirits can be selected on the Shrine menu and each provides a different boost to the player.
Activate Yokai Shift by pressing △ + O (B + Y on Xbox/Steam controller)when the Amrita Gauge is full.

"This guardian spirit, resembling a shark, is actually a type of tatari-gami (cursing god). Although they are usually hostile towards humans, they will offer their protections to those that worship them. It was said that Kagewani would eat the shadows that fell on the surface of the sea, and that those who had their shadows eaten would die shortly after. This was deemed to be a way of punishing man for venturing out of his realm. As such, sailors would make offerings to appease the sea gods before venturing out into the waters."

"While wani means crocodile in modern Japanese, it was also previously used to refer to sharks. There is also a theory that the Kagewani was in fact a crocodile, sea serpent, or orca that later transformed into a shark as a manifestation of the image its many worshippers held of it." 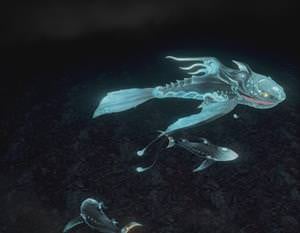