Makami is one of the three starter Guardian Spirits
, along with Ame-no-Mitori and Kagewani.
Guardian Spirits can be selected on the Shrine menu and each provides a different boost to the player.
Activate Yokai Shift by pressing △ + O (B + Y on Xbox/Steam controller)when the Amrita Gauge is full.

These wolf guardian spirits, also known as Oguchi-no-Makami, are said to be the servants of the mountain gods.
Mountain wolves were seen as the embodiment of the fear and awe men felt towards the mountains, the domain fo the gods, that they were unable to claim for themselves.
However, they were also worshipped as protective spirits, for they hunted the vermin that would harm crops and were also believed to ward off fires. As servants of the gods of volcanos, it was only fitting that they had the ability to manipulate fire, and protect against it.

How to unlock Makami

How to use Makami 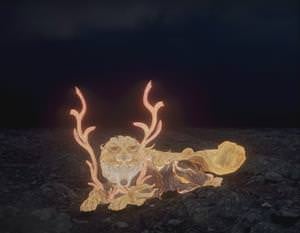