Rokugezo is one of the Guardian Spirits in Nioh 2
.Guardian Spirits can be selected on the Shrine menu and each provides a different boost to the player.
Activate Yokai Shift by pressing △ + O (B + Y on Xbox/Steam controller)when the Amrita Gauge is full.

Rokugezo, meaning "Six Tusked Elephant", takes the form of a gigantic white elephant. Elephants were once used in Tianzhu (modern-day India) as a symbol of military might, with the number of elephants possessed by an army corresponding to that army's perceived strength.

It is said that in heaven, elephants served as the Buddha's mode of transport. It is widely known that the boddhisatva Samantabhadra and Sakra, Lord of the Devas, were also elephant riders themselves.

While Rokugezo may be adorned with florid decorations, its ferocious countenance and six sharply tapered tusks exhibit its ability to mercilessly cru*****s opponents. Yoshimoto inherited Rokugezo from Sessai Choro, his most trusted retainer and longtime teacher. 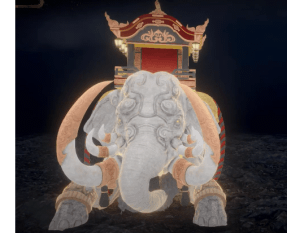