Shin-Roku is a Guardian Spirit in Nioh 2. Guardian Spirits can be selected on the Shrine menu and each provides a different boost to the player. Activate Yokai Shift by pressing △ + O (B + Y on Xbox/Steam controller) when the Amrita Gauge is full.

In Japanese mythology, the holy deer is an envoy for the gods. It frequently appears before heroes to guide them to victory. The holy deer is also the physical embodiment of the power of nature, and can heal minor wounds almost instantly. This earned it the veneration of many low-level warriors, since they were the first to be injured in battle. 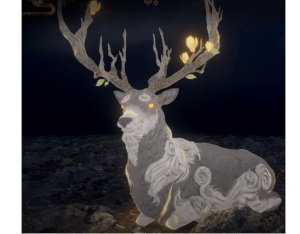