Shirohami is one of the Guardian Spirits in Nioh 2
.Guardian Spirits can be selected on the Shrine menu and each provides a different boost to the player.
Activate Yokai Shift by pressing △ + O (B + Y on Xbox/Steam controller)when the Amrita Gauge is full.

Shirohami is a Guardian Spirit in the form of a white viper. White snakes are worshipped in many regions of Japan as messengers or personifications of the gods, often being seen as symbols of growth, rebirth, long life, and prosperity. The messenger of Benzaiten, patron goddess of prosperity and the arts, is believed to be a white snake that will bring one vast riches. This belief has led to the Japanese practice of keeping the shed skin of a snake in one's wallet, or using a wallet that is made of snakeskin. Many snake deities are also considered gods of the water, a famous example being the white snake emissary of the Suwa Grand Shrine. The viper's powerful venom and extremely resilient nature have long made it an object of reverence, so a white viper in particular should be considered a most powerful spirit. 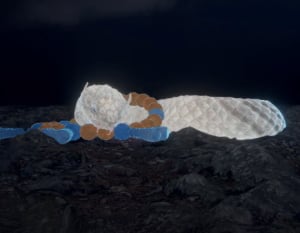