Suzune in the Flames | Nioh 2 Wiki

Suzune in the Flames is a Main Mission in Nioh 2's DLC, Darkness in the Capital. This mission is recommended for level 130, has a difficulty level of 3, and features both human and yokai enemies. Suzune in the Flames tasks players to find the one who wields Sohayamaru through the burning capital. Please see Missions for other walkthroughs on other missions. 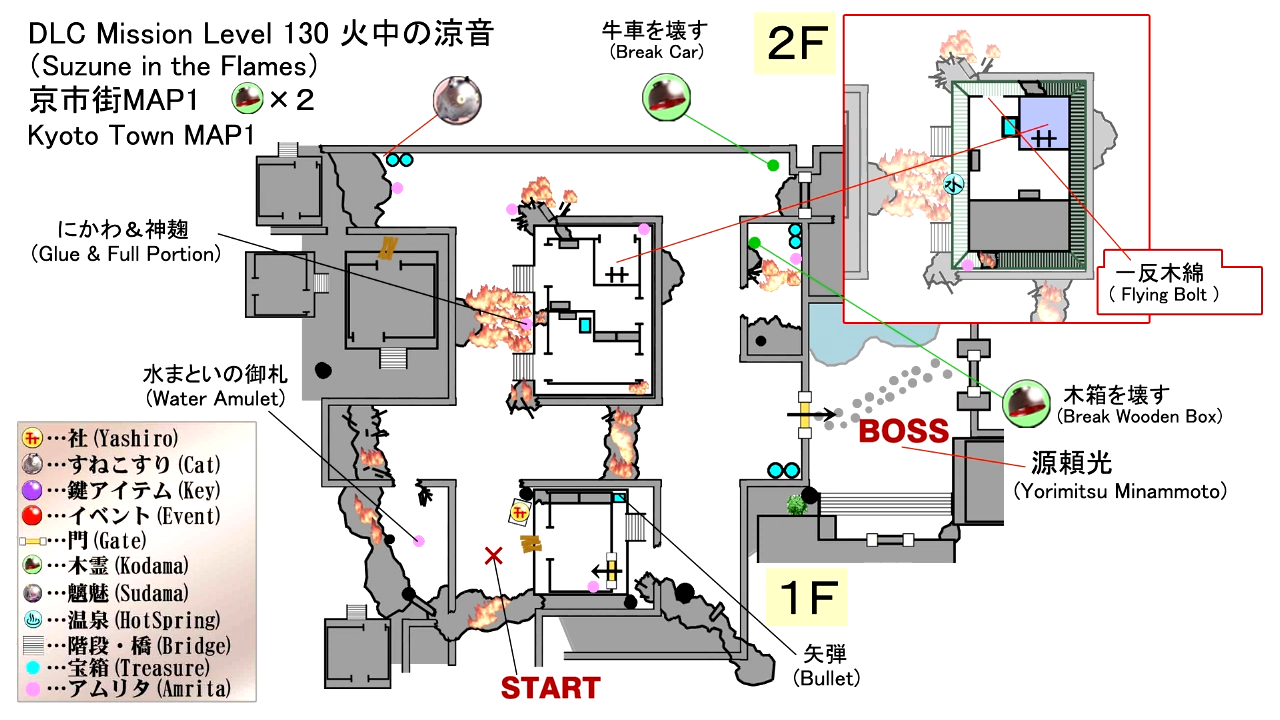 Suzune in the Flames

"That's the bird spirit, Oh, that appeared in Yoshitsune's thoughts... And that means we've come to the right place. This time it seems to be that box that's called us here. It's all very mysterious indeed, but at least we're better prepared than the first time. Could there be another at this time? One whose fate is bound to the Sohayamaru?"

"We saw the Sohayamaru gleaming, and Oh floating behind her. Then she introduced herself as the Demon Slayer. That can only mean that we have found the famed yokai hunter, Minamoto no Raiko. While I'm glad to have found the one we seek, sadly in her eyes you are nothing more than another contemptible demon to be slain. You'd be wise to tread carefully unless you're eager to join hr collection of Soul Cores."

Suzune in the Flames Walkthrough 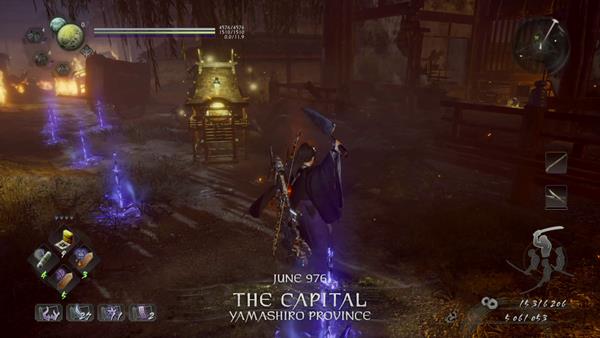 The year is June 976 and you arrive at The Capital, Heian-Kyo in Yamashiro Province. From the first Kodama Shrine, go right inside a building and loot the body to find x1 Yokai Incense and x1 Small Spirit Stone. Ignore the large gate on the left side of the corpse since it's locked and you need to open it from the other side. From the first Kodama Shrine, go west and you'll see a broken wall that leads to a backyard. You'll see a hostile Yokai which is the Wheelmonk, kill it, loot the items that are dropped, and check the nearby corpse to find x1 Water Amulet and x1 Kawanami Clan Vest. 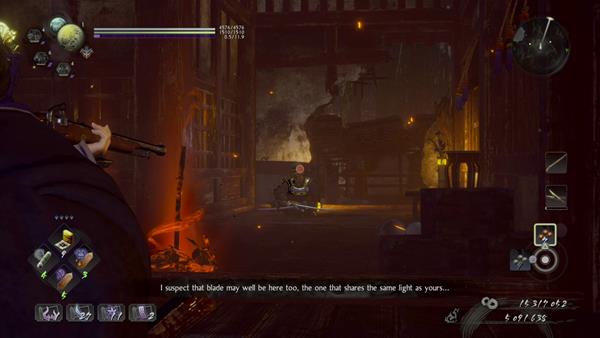 Continue straight from the Kodama Shrine and you'll encounter an Aberrant Soldier by the steps and on the roof is a Skeleton Warrior (Archer). Kill it and then by the entrance, ready your bow or rifle and aim for the head of the Rokurokubi that's sitting inside the building. When it's true yokai form appears, ready your ranged weapon for the second time and aim for the head, this will stun the yokai, allowing you to rush in and execute a powerful blow. After killing both enemies, open the chest on the left side of the building to find x1 Sacred Ash and Saika Clan Gauntlets.

Next, through the wall and at the backside of the patio, go straight and you'll find a corpse by the corner that you can loot to find x2 Antidote and x1 Large Spirit Stone. But be careful, there's a Warrior Skeleton hiding around the corner on the left. Kill it and then loot the body. Go around the corner from where the skeleton was and you'll find a ladder inside the room, climb it to reach the second level of the building. On the second floor, you'll see a yokai mist blocking the path leading to the roof, approach the mist, and a Flying Bolt will appear that also conjures the Dark Realm. Kill it for a chance to obtain the Flying Bolt Soul Core and open the large chest that was next to the yokai mist on the right. Inside the chest, you can find x1 Lightning Amulet, x1 Chief's Fists, x1 Irregular Troop's Greaves1 x1 Longbow, and x1 Whetstone. After looting the chest, go outside to the roof and kick down the large bucket of water to put out the flames below, also, by the edge of the roof, you'll see a corpse that you can loot to find x1 Fan. 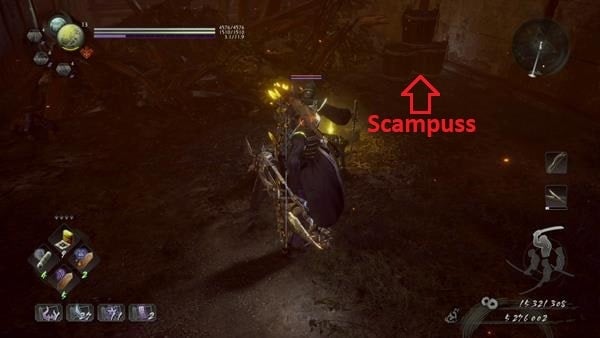 After clearing the second level, climb back down the ladder and head inside the building next to it where you'll find a Yamanba and a Gaki. Kill both yokai then head outside through the front of the building and you'll see an Aberrant Soldier next to a corpse, kill it and then loot the body to find Child of the Sun's Helmet. On the right side of the corpse, you'll see some stacked buckets, destroy it and you'll find a Scampuss behind it. Turn around after petting the Scampuss and you'll be able to loot Daion-Jin's Sake on the right side next to the debris. Now, go straight and you'll encounter a new enemy, Oboroguruma. 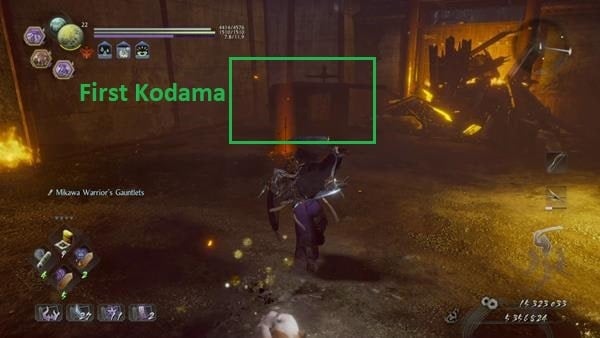 After defeating the Oboroguruma, just go straight towards a dead end where you'll find a broken carriage. Destroy it and you'll find the first Kodama for this mission. After guiding the Kodama, head east and then turn left where you'll encounter x2 Oni-bi. 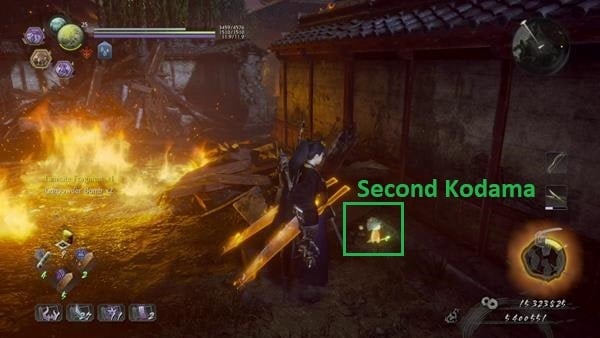 Kill it and then dash through the flames. Break the bucket of water that's on the right side to remove the burning effect, loot the corpse next to it to find x1 Lumicite Fragment, and then on the left side, you'll see a wooden box. Destroy it to find the second and last Kodama for this mission. After guiding the Kodama back, retrace your steps and continue forward where you'll encounter another Skeleton Warrior and a One-eyed Imp. 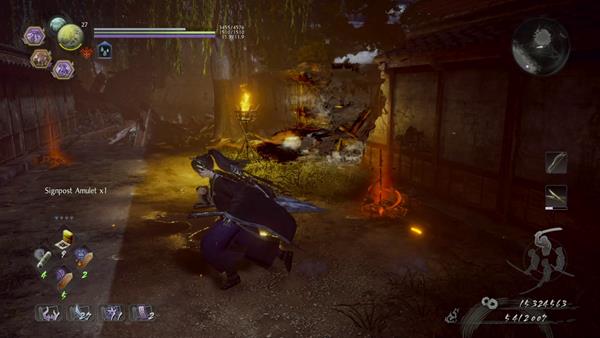 Next, keep going straight and you'll see a yokai mist on the right that's blocking your way, approach it to summon the yokai within it which is the Kiryoki. Kil it for a chance to obtain its Soul Core, Kiryoki Soul Core along with other loot such as x1 Lantern Plant Fruit, Red Demon Gauntlets, and the Seven Scalp Switchglaive. Head towards the back of the building from where the mist was, open the small chest on the right side of the patio to find x1 Enenra Mask, x1 Courtier's Waistguard, x3 Arrow. And then unlock the gate on the left side to open up a shortcut that leads back to the first Kodama Shrine. Save your progress, head towards the marked objective, and open the large gate that triggers a cutscene. 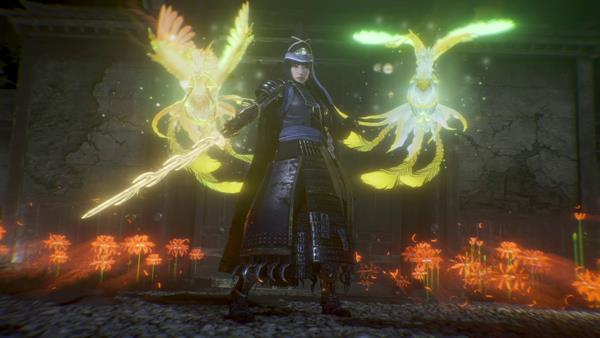 As you open the large gate, a cutscene will trigger and you'll be ambushed by Minamoto no Yorimitsu who wishes to fight and slay you. Be mindful when you are fighting her since you'll be in the dark realm for the entire fight. When the battle starts, be ready to dodge since she'll summon a Yokai that will emerge from the ground. You'll see a grey field under you before it pops out, so you'll have at least a second to dodge away to avoid getting hit. 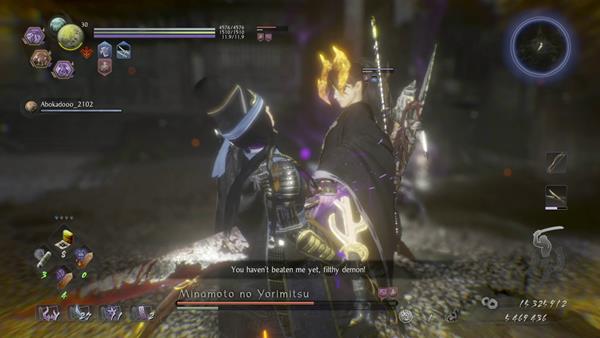 You can use the Sloth Talisman against her to decrease her movement speed as well as the Weakness Talisman to reduce her defenses. Yorimitsu is a human boss so you'll want to try and reduce her stamina bar so that you can execute a powerful blow when she's stunned. Once you've inflicted about 30-40% damage to her HP, she summons forth her Guardian Spirit and uses Yokai Shift which empowers her attacks by infusing it with flames and she gains a new attack as well. This battle ends when her health is down to 30% and a cutscene will trigger. Before you exit the mission, make sure to grab all the loot - you'll obtain the trophy, "The Demon and the Phoenix" for completing this mission.