The Blighted Gate is a Main Mission in Nioh 2. This mission is recommended for level 131, has a difficulty level of 3, and features both human and yokai enemies. The Blighted Gate tasks players with continuing their pursuit of Lady Raiko and to head towards Rashomon gate. Please see Missions for other walkthroughs on other missions. 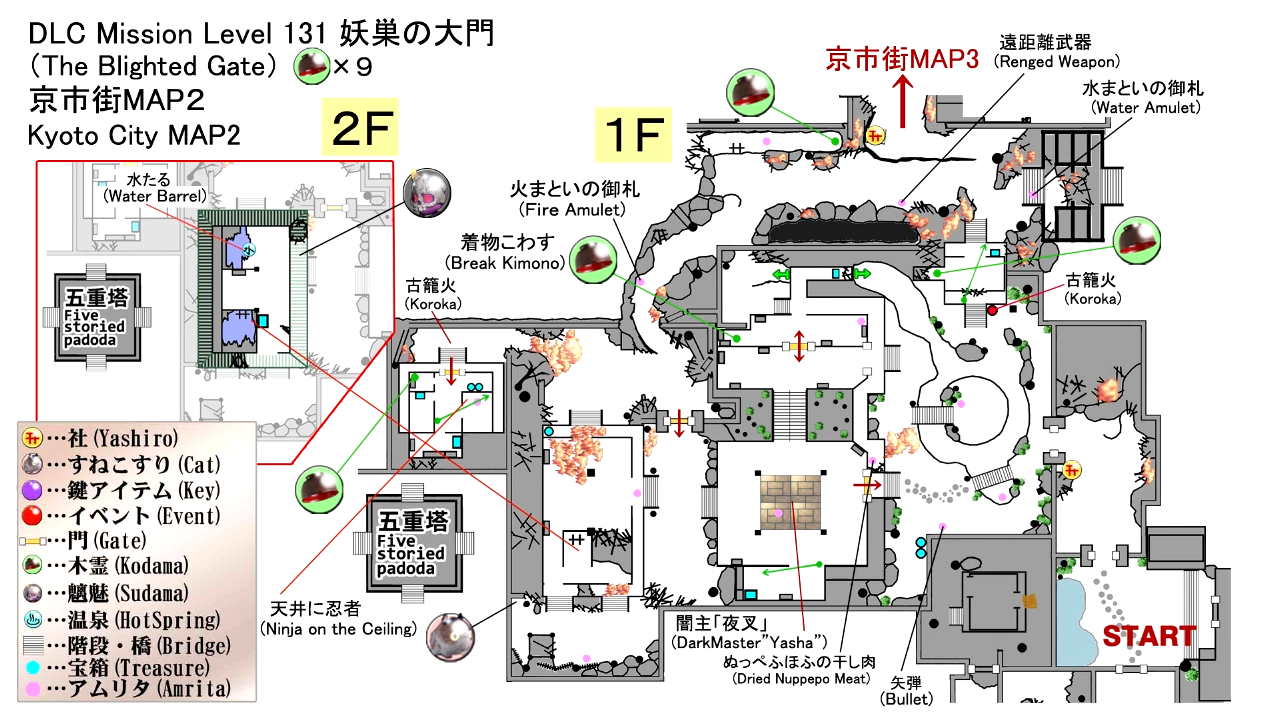 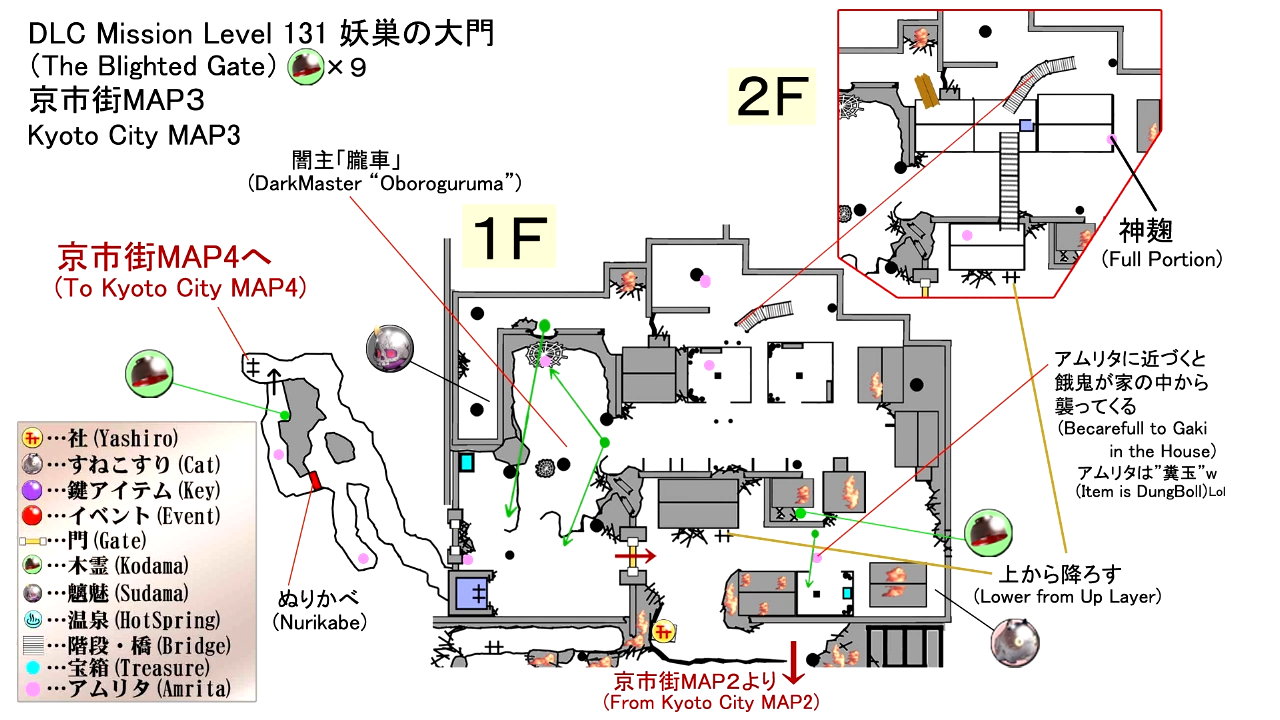 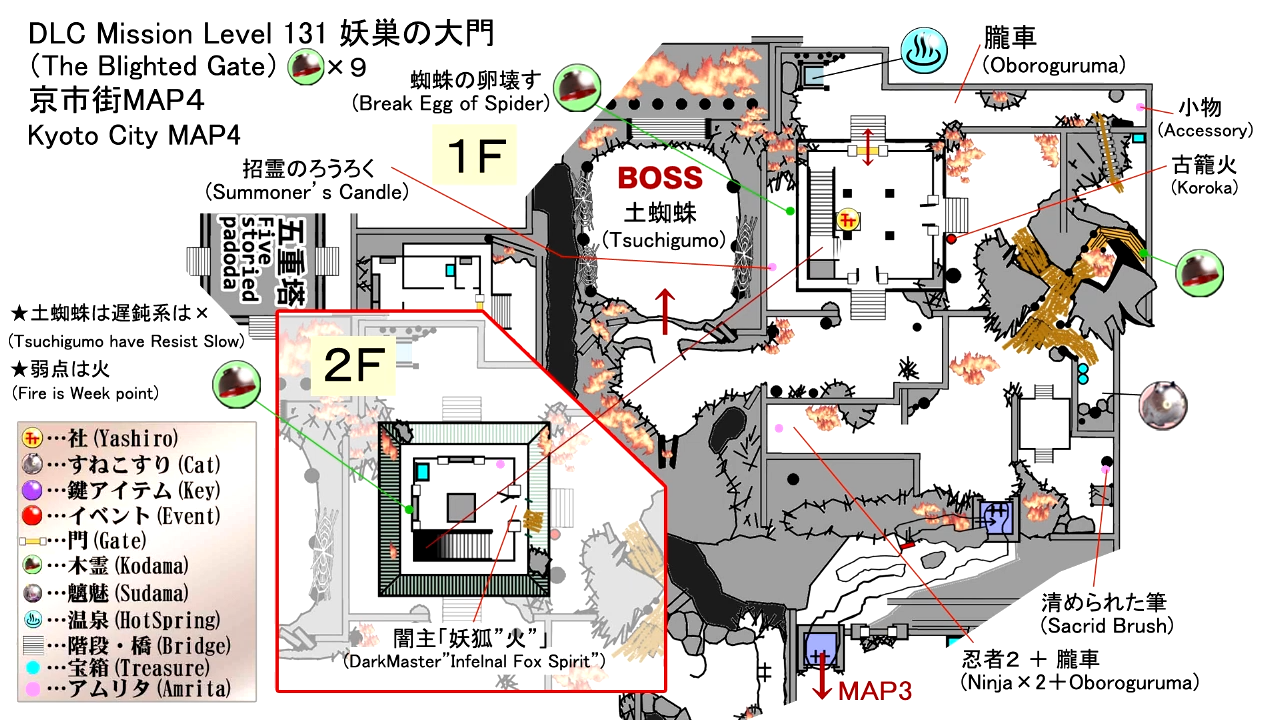 "Truly she is a formidable warrior to hold her own with ou in battle like that. But clearly, she had some more important business to attend to. I fear that something terrible is afoot. Well, we're not going to get any answers standing here. Let's follow them - we know precisely where they're headed, after all. Come, let's hurry."

"For years we have done battle with that wretch, the Tsuchigumo, before you finally rid us of it. You have our deepest gratitude. But I am afraid I have more to ask of you. The series of calamities that have befallen this city, together with the ever-growing swarm of yokai, vengeful spirits, and other assorted fiends would suggest that someone is lurking in the background, pulling the strings. If this turns out to be Doman, then I shall have no choice to track him down and settle things once and for all."

Players pick up where they left in Suzune in the Flames and continue their pursuit of  Lady Raiko (Minamoto no Yorimitsu) at The Capital, Heian-Kyo in Yamashiro Province. Go straight, from the starting point and you'll find the Kodama Shrine on the left side near the main gate. From the shrine, head towards the gate on the left to start exploring.

Go left from the garden section and you'll see a Tesso feeding on a corpse, kill it and then loot the body to find x2 Fragrant Wood. From the corpse, drench yourself with water by destroying the bucket that's by the corner on the left, next, go right and run towards the flames. On the other side of the flames, cross the small bridge on the right and loot the corpse next to the tree to find x1 Sanada's Crimson Helmet and x1 Seki Dual Uchigatana.

Go inside the building after grabbing the items and kill the roaming Tesso. Before you head towards the Dark Realm on the left side, open the door on the right and look to the left to find the first Kodama at the corridor. Loot the corpse to find x2 Yokai Water Pot. There's a small corridor where you can find a small chest containing x1 Leaf Tip Spear, Kawanami Kusarigama, and x1 Blessed Sleeve Hat. Check the backside of the building and clear the lower section first of the garden first before going back inside and heading inside the Dark Realm.

Inside the dark realm, you'll find a Yasha yokai sitting at the center of the room. You can gain the upper hand by shooting it at the head with your ranged weapon and then bait it outside of the dark realm to remove the buffs it gains in the realm. Just don't fight too far from the entrance of the dark realm or it will just disappear and teleport back to its spot. Killing it will dispel the dark realm. Clear out the rest of the Yokai in the room, open the door on the left side to open up a shortcut, loot the large chest in the room ahead, and then head towards the next section.

For the east wing, you'll see x2 Fox Spirit yokai. Ignore the gate on the right since it's locked and you need to open it from the other side, so head towards the opposite building and kill the Fox yokai first. Go in the building and turn left to reach the back of the building.

By the patio, ready your ranged weapon and aim at the front. Shoot the Shinobi that's looting a corpse and on the right side, you'll find another Shinobi that's looking at a Scampuss. Go back inside and climb up the ladder to reach the second floor.

Open the large chest first and kick the large bucket of water to put out the flames below. Next, go out and head onto the rooftops, kill the roaming Shinobi and check around the corner to find a Sudama. Go back down the first floor and head to the next section where you'll encounter a large Nuppeppo. Kill the yokai, and open the gate on the right. Before going up the slope, head to the left and run across the fire to reach a building, where a Koroka will be at the front. After defeating it, open the doors to the building and look to your right, to a broken wall leading to a room. At the end of the room, break the boxes to find a Kodama. Still inside this building, in the room to the left, there's a shinobi in the upper left corner as soon as you enter the room. Kill the Shinobi and at the end of the building there will be another Shinobi and a chest. After clearing this, head back to the slope and go up it.

Loot the corpse that's along the path and head forward a bit where you'll see a large Gaki. Kill the Gaki, turn left, and a Warrior Skeleton will spawn next to a ladder. Slay the skeleton, climb down the ladder and you'll see a Fox Spirit at the end of the path below. Kill it and you'll find a Kodama behind it.

Climb back up, kill the rest of the yokai roaming around and, before you head up the slope where the Kodama Shrine is, check the destroyed building on the right where you'll encounter a Warrior Skeleton. Kill it, open the small chest on the patio, and head inside the building where you'll find another Kodama.

The west gate is locked, so head east towards the open barn and small houses. Kill the large Gaki and the rest of the small Gaki that's in the first section, check inside the barn to find loot, and go behind the small house next to it. You'll find some stacked boxes where the Scampuss is hiding.

Head further towards the inner section where you'll encounter a roaming Yasha. Kill it and then check behind the houses on the left where you'll find another Kodama. Now, if you go straight, you can enter the second dark realm. But instead of going to the front, make sure you clear out the open houses first for loot and head behind the houses on the right side. You'll find a wooden bridge that you can walk onto to reach the rooftops of the houses.

There's a path from the rooftops that will take you to the dark realm. This way, you'll have the advantage of scouting the area from high ground. Kill the Gaki that's by the ledge and then go around the corner to find a Warrior Skeleton and another Sudama. After trading with it, scout the area below you and take out any yokai that you see with your ranged weapon. When the coast is almost clear, you can jump down and kill the Oboroguruma to dispel the dark realm. Once you've cleared the section, open the large chest, unlock the gate on the left to open a shortcut back to the second Kodama Shrine, and then climb the ladder down on the right side from where the dark realm was to enter the underground area.

Before you head straight towards the yokai mist blocking the way, kill the two Shinobi enemies that are on the left side, one is roaming, and the other is around the corner next to a corpse that you can loot to find x1 Bloodspider Blade. After killing both human enemies, approach the mist and a Tesso will appear. Kill it and go to the left of the big rock in the middle of the cave, where you will find a Nurikabe. Kill it and keep following the path behind him to find a Kodama to the right, behind some rocks. Now, climb up the ladder that's at the end of the path. When you reach the top, you'll find yourself at the innermost section of the capital. You'll see a Yasha that's hammering something onto the tree.

Before going inside the third dark realm, go straight towards the flames and you'll find another Kodama around the corner on the wooden platforms. Next, go back and enter the third dark realm. Inside, you'll encounter a Tesso, a few Spider yokai, Koroka, Warrior Skeleton. Go inside the pagoda and head to the second floor to find the source of the realm which is an Infernal Fox. Kill it to dispel the realm, open the large chest that's also on the second floor.

Go outside the balcony from the second floor and turn right. Go around until you reach the back to find another Kodama. Also near the balcony, there's a path that leads to the roof of this pagoda. You'll find another Sudama that's being guarded by a Gaki. After grabbing both Kodama and the Sudama, go back down and pray at the Kodama Shrine if needed. On the right side of the Kodama Shrine, there's a door that you can open where you can find a Spa. From the third Kodama Shrine, exit the door on the left and turn right, next to the building's wall, to find a path that will take you to a Kodama that's next to some piles of dirt close to the fire. Defeat the Yasha that's roaming around and just past it you'll reach the marked objective.

You'll now enter a boss battle against Tsuchigumo. Tsuchigumo is a spider yokai, most of the time, it will jump onto walls and fight you with leap attacks while at the same time it will shoot out webs hoping that you'll make a mistake and get caught in it. This boss is somehow weak against fire, so bring Flaming Heron Feathers and Fire Talismans to fuse your weapon with flames.

What's good about this battle is that you can block both of its leap attacks even if it's empowered in the dark realm, and every time it lands after an aerial attack, you can fight back and land one to two hits. The Switchglaive is a good weapon to be used against Tsuchigumo since it has a nice balance of attack, reach, and defense.

Take advantage of using a Burst Counter against its Burst Attack since a successful Burst Counter can interrupt the deadly blow and you can punish it while it tries to recover. Another tactic you can exploit is when it releases a roar and it slams a ball of web onto the ground which later on spreads around it. When this happens, dodge back to avoid getting caught in the web and quickly use Flaming Heron Feathers, the projectiles from this item will cause damage and the burning effect that slowly decays its HP until the effect has worn off.

After defeating it, grab the items that drop along with its soul core, Tsuchigumo Soul Core. A short cutscene will then follow after you exit the mission and you'll obtain a new Guardian Spirit from Seimei, Kuzunoha the Fox.