The Underworld is endgame content added with The First Samurai DLC. It is unlocked when you unlock Dream of the Nioh, the final New Game Plus Cycle, and it is divided into two sections: The 108 normal Underworld Floors that are static, and the 30 randomly generated floors of the Depths, in which the first five floors change daily and the remaining 25 are randomly generated every time you enter. This is also where you gain the ability to increase the + level cap of your items, increase the chances of gaining Ethereal and level 200 items, and the possibility of gaining the exclusive Ethereal Graces and Scrolls of the Damned.

The Underworld is made up of three sections:

There are shrines in every section, and you can play the underworld in Multiplayer in either Expeditions or by summoning a Visitor/ Random encounters which lasts only for that floor. You can only be a visitor to floors you have already completed.

There are 108 floors for the Underworld. Once you Complete them, you gain access to the Underworld Depths and the Agyo Nioh Mask Smithing Text. While the original 108 floors are predetermined, the first five floors of the depths of the underworld shift daily, and the rest are randomly generated upon entry.

You can select the Underworld by entering the uppermost icon in the left side of the map screen, right above scroll missions. This only becomes available once you unlock Dream of the Nioh. 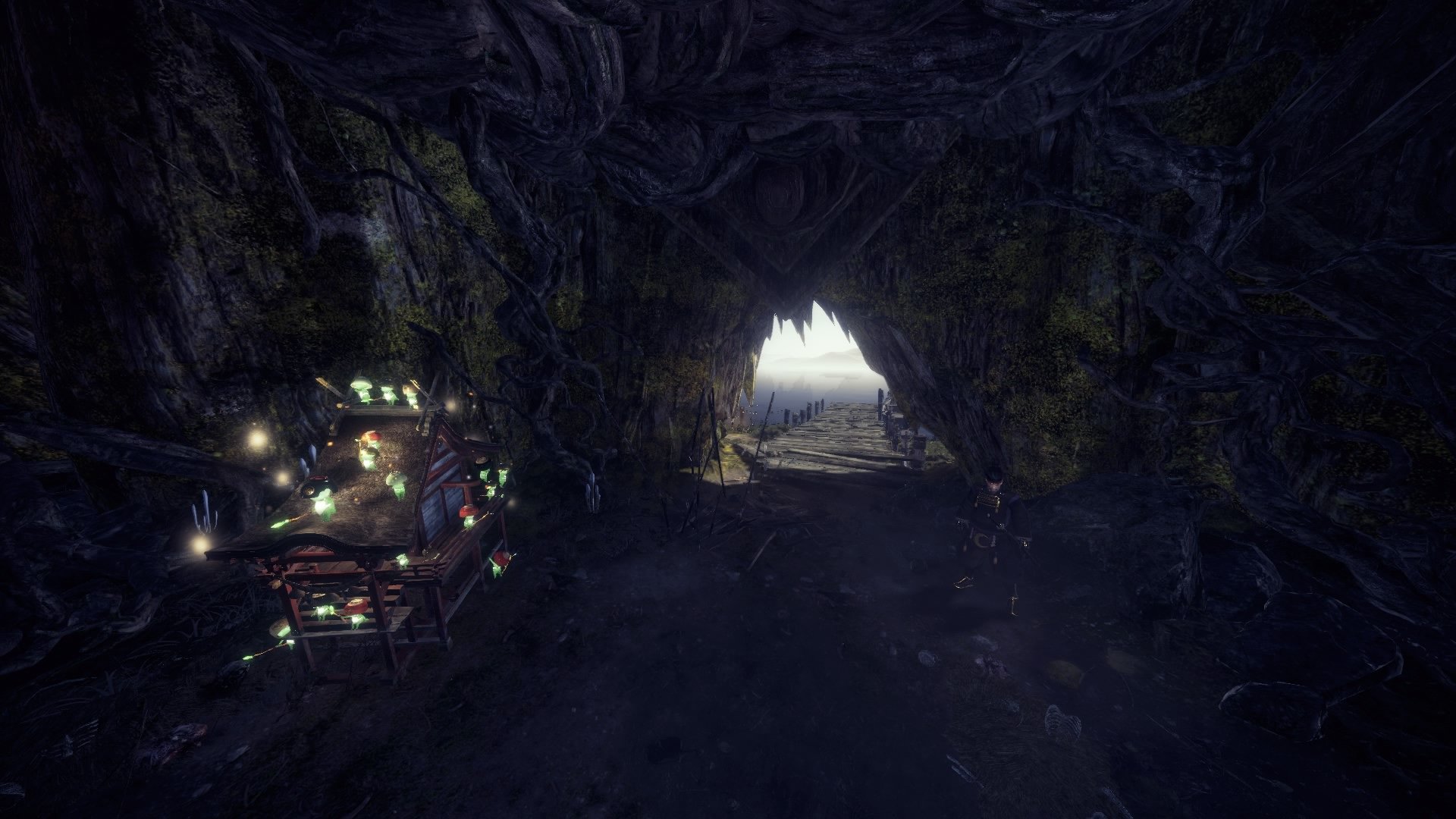 This is the starting area whenever you enter the Underworld. There are four points of interest:

This takes place in one of the mission areas from the game. Each area in the underworld has the same map and loot layout,, and roughly the same enemy layout, with a few changes that are randomized or based on the specific floor you are on. In the first 108 floors, the map chosen always the same on a specific floor, from a pool of 32 available maps, however in the Depths, there is an expanded selection of maps available.

Your goal here is to find up to four of the Jizo Kodama, Each one gives you a special effect that applies during the Crucible, called a Jizo Blessing. You can upgrade the power of three of them by spending Lapis Lazuli in Terra Firma. The color of the Headwear the Kodama are wearing shows you what blessing they will give you.

The spawn points for the four Kodama are the same on each floor, but which Kodama is where changes on each floor.

Once you interact with one of the Kodama, they will be replaced with an interactable that allows you to go to the Crucible. Another one also appears near the Shrine where you entered the area. Once you go to the Crucible, you can not return to the Netherscape, so make sure you have done everything you needed to do before hand. Any acolytes from benevolent graves will come with you to the crucible.

A special note: The Underworld uses Spectral Salves and not elixirs. These function identically to Elixirs, and are affected by the same effects, such as Untouched Elixir, Healer and Elixir Efficacy. However, they are considered a separate item, so your Elixir stock will not carry over to the Underworld. Moreover, you only have three by default, they do not appear in the Kodama Bazaar for sale, and the only ways to get more is to either kill enemies or to find the Jizo Kodama, which will raise your default elixir count by one for each one found, for a maximum of seven. However, the extra Elixirs from the Jizo only apply to that floor, and your stock is lost every time you exit the Underworld. Because of this, you should strongly consider clearing the netherscape just for the extra Elixirs, at least for the first floor anyway.

In addition to this, one of a selection of enemies per map will spawn with a unique curse in the netherscape, shown by their purple glow. This enemy will have stronger versions of the Curse of the Nioh effects, significantly increased health, and is only affect by Confusion's prevention of Ki recovery for Yokai as long as you keep hitting them. These enemies will not respawn after they die.

The Crucible is where you will most likely get the majority of your Underworld Lapis Lazuli. They most commonly drop from Cursed Enemies, Dark Realm Bosses, enemies that spawn from smoke clouds and Crucible Bosses.

This is where the boss blocking your entry to the next floor waits. Defeating the boss leaves two interactables - one takes you to the next floor and netherscape, and the other is the exit back to the main map. The crucible takes place typically in the specially designed open area at the top of this page, however it occasionally takes place in the Nightmare Bringer boss fight area. There are also some changes made to the arena to accomodate three of the boss's unique attacks:

These changes telegraph which boss you are about to fight.

Remember that you cannot return from to the previous Netherscape from the Crucible. If you run out of Spectral Salves or need to leave the underworld, you have to use a Sacred Branch / Sacred Branch Fragment.

Remember to check the Kodama Bazaar if you play online - it won't have spectral salves but you will be able to by extra jutsu items used by other players that completed that floor, even allowing you to carry more than you otherwise would have. These also persist until use, and won't go away when you enter the next floor. This is particularly useful for getting an extra Quick-change Scroll to use. 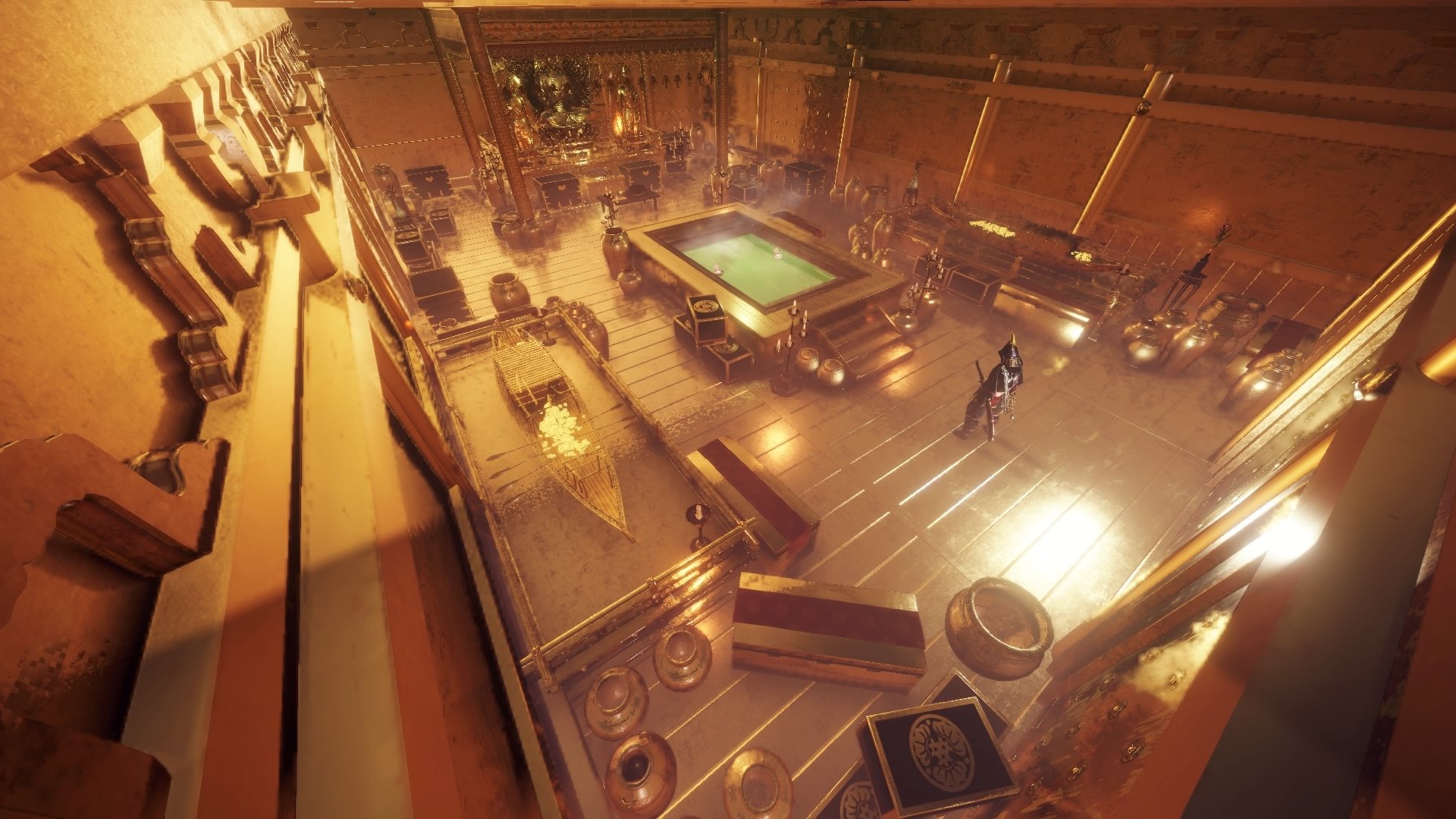 Once you go to the next floor from the Crucible, you have a random chance to be sent to the Treasure Room first.
Not only does this room have six treasure chests with high drop rates for Divine and Ethereal items, every single breakable item also has a high chance of dropping equipment, giving you a large amount of free loot.

See this link for the list of Netherscape maps and Crucible Bosses for the first 108 floors of the underworld.

Depths of the Underworld

After completing the 108 floors of the underworld, you gain access to the 30 Underworld Depths floors. They can first be accessed by selecting the underworld and choosing the floor ??? option. These function similarly to the normal underworld floors, however there are several major differences:

Ethereal Graces in the Underworld

In the Underworld, each floor only drops a specific pool of ethereal graces. This also applies to the first five floors for the Depths of the Abyss; after that, any grace can drop, including the two exclusive graces to the the depths 6+, Grace of Oyamatsumi and Grace of Shinatsuhiko. To know which pool you are in, divide the floor number by three, and look at the remainder.