Yaonami-Hime is one of the Guardian Spirits in Nioh 2
.Guardian Spirits can be selected on the Shrine menu and each provides a different boost to the player.
Activate Yokai Shift by pressing △ + O (B + Y on Xbox/Steam controller)when the Amrita Gauge is full.

Yaonami-Hime possesses the upper body of a woman and lower body of a fish. Once the daughter of a noble family in the Heian period, she consumed the flesh of a mermaid and was granted eternal life. However, her immortality came at a price as she was forced to watch the people she loved depart this world one by one. Unable to bear the sadness and loneliness that accompanied her gift, she finally drowned herself. It is said that deep beneath the water's surface, she was transformed into a mermaid. Mermaids have existed in Japanese folklore for many centuries. Besides being written about in the Nihon Shoki in the year 720, there is also the famous account of Prince Shotoku, who built a temple to honor the request of a soul who had been turned into a mermaid due to their deeds in a previous life. Mermaids are seen as both auspicious and inauspicious, with some considering them ominous portents of natural disasters and others believing in their ability to extend one's life or protect one from fire. 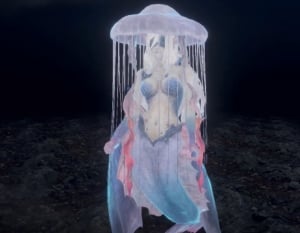