Yumehami is a Guardian Spirit in Nioh 2. Guardian Spirits can be selected on the Shrine menu and each provides a different boost to the player. Activate Yokai Shift by pressing △ + O (B + Y on Xbox/Steam controller) when the Amrita Gauge is full.

Yumehami is said to be able to devour one's nightmares and protect one's dreams of good fortune—or conversely, cause the former while devouring the latter. The baku, an ancient Japanese mythical creature, is known to exhibit the former type of behavior so the latter is perhaps that of a baku who has transformed into an aragami. The Chinese poet Bai Juyi of the Tang Dynasty described the baku as a creature with an elephant's nose, rhinoceros's eyes, cow's tail, and tiger's legs. While the Chinese once believed that sleeping on the skin of a baku woSd keep evil away, this practice transformed when it made its way to Japan, with the baku eventually coming to be known for its dream-eating nature instead. Representations of baku in text or imagery were used as talismans in the Muromachi period. There is also a practice in Japan of placing a picture of a ship bearing treasure under one's pillow during the New Year to usher in good dreams. Sometimes, the word "baku" is written on the sails of these ships, in hopes that the baku will devour any nightmares that may come the sleeper's way.

How to unlock Yumehami

How to use Yumehami 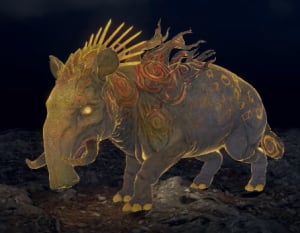