Isanagami is a Guardian Spirit in Nioh 2. Guardian Spirits can be selected on the Shrine menu and each provides a different boost to the player. Activate Yokai Shift by pressing △ + O (B + Y on Xbox/Steam controller) when the Amrita Gauge is full.

Isanagami, a Guardian Spirit with the form of a whale, is a type of yorigami (visiting god) from the sea. This god of fishing is believed to bring fishermen bountiful catches in its wake. While whales are themselves hunted, they tend to bring schools of smaller fish with them, making them invaluable to fishermen. Over time, this caused whales to be connected with Ebisu, god of fishermen and luck, and associated with successful commerce and bumper harvests. The word "Ebisu" itself used to be a general term for someone from a distant land, eventually evolving to mean any religious faith that came to Japan from beyond the sea. Beached whales or the corpses of whales that drifted ashore were seen as unexpected blessings granted by Isanagami, and were likely met with gratitude. 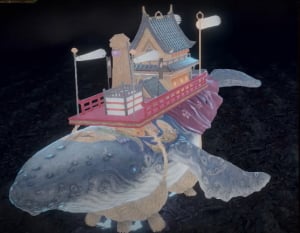