Genbu is a Guardian Spirit in Nioh 2. Guardian Spirits can be selected on the Shrine menu and each provides a different boost to the player. Activate Yokai Shift by pressing △ + O (B + Y on Xbox/Steam controller) when the Amrita Gauge is full.

A cross between a turtle and a serpent, Genbu has been worshipped since ancient times as the guardian of the north and the symbol of water. The dual nature of its intertwined snake and turtle bodies have also made it a symbol of yin and yang, and indeed, its ties to Onmyo magic are deep. Highly skilled Onmyo mages venerate Genbu as their guardian spirit, and have mastered the many powers of water in order to extinguish fire, which they see as an agent of chaos.

How to unlock Genbu

How to use Genbu 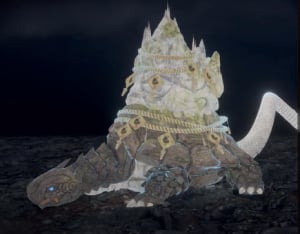