The Dragon Clan is a Sub Mission in Nioh 2. This mission is recommended for level 140, has a difficulty level of 3, and features both human and yokai enemies. The Dragon Clan tasks players with meeting and fighting against the great Hayabusa. This mission is part of the Darkness in the Capital DLC. Please see Missions for other walkthroughs on other missions.

"Hmmm...? A throwing knife with a letter attached you say? Bring it here then. Let me take a look... "The Hayabusa wish to meet the demon who cuts down their own kind." The Hayabusa? I'm sure I've heard that name before... Wait! Can it be...!? Quick! You need to prepare yourself for battle."

"What a splendid fight that was! So they were truly a ninja of the Hayabusa. I confess I was surprised to learn that their school has been in existence since the early days of Heian. William once crossed blades with them, and Hanzo tried to uncover their true identity but could learn nothing more than that they belonged to a ninja clan. With that extraordinary strength, I would not be surprised in the least if their ancestors had non-human blood in their veins." 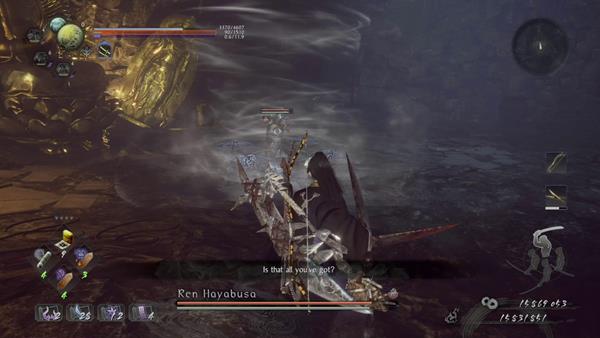 For this mission, you'll find yourself at a boss arena where you'll fight against Ren Hayabusa. Walk to the center of the area and you'll hear Hayabusa taunt you, he'll appear after a brief moment and the battle will begin. Hayabusa is an agile human boss, so you'll want to use the Sloth Talisman against him to decrease the movement speed as well as the Weakness Talisman to reduce his defenses. And for yourself, bring a Steel Talisman to increase your defenses.

As for his attacks, when he appears, he'll strike from above, so be ready to block. For the majority of this battle, you'll want to keep your guard up since he'll be jumping around you. That's why you need the Sloth Talisman so that you can slow his movements down a bit. When he charges up and conjures a whirlwind around him, again, ready your guard up since blades will emerge from the whirlwind that will shoot at you. Hayabusa is a human boss, so don't be afraid to attack him even if he's blocking as well, you want to damage and at least deplete his stamina so that you can execute a strong attack.

Hayabusa can use his sword and switch between Fists. His attacks become faster when he has the fists equipped, so again, you'll want to block his chained attacks. When you see him charge up energy and you see a purple aura around him, quickly run and be ready to dodge the projectile that he'll shoot at you. This can instantly kill you if you get hit. He does have a burst attack where he'll execute a slashing attack with his sword, you can interrupt this with a burst counter. 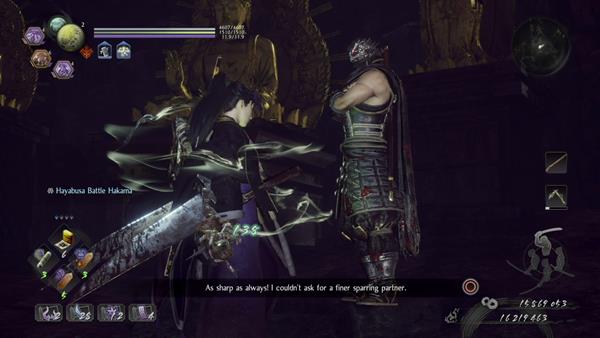 Apart from that, he also uses tools such as throwing shurikens at you and he also conjures a large fireball that you can avoid by dodging to your sides, the fireball tracks you so bait it a bit and then dodge roll when it's almost near you. As for weapons, the Switchglaive is a good choice against Hayabusa since it has a good range and a great balance between attack and defense. Defeating Hayabusa grants The Art of Combat: Flame Dragon which unlocks the Flame Dragon skill, The Art of Combat: Izuna Drop which unlocks the Izuna Drop skill, as well as armor pieces for the Hayabusa Armor - speak to him to close the mission.